How the “System” is set up for you to Achieve Less than You are Capable of, and how you can overcome it.
By Arthur Carmazzi


How can you beat the odds? What tools do you need? Listen to Arthur Carmazzi at TEDx SDU as he  takes you through the process of becoming a high performer and overcome being an under achiever.

According to a global Gallup study, only 13% of the world’s workforce is fully engaged. That means 87% of you are going to be underachievers. When you start any kind of new job, what do you do? You’re excited, aren’t you? When you go into this job, are you like, “Oh, I got a new job. Yay,” or are you like, “Wow! Think of what is possible!”? You’ve got all these ideas and you’ve got all these things, and you know you are going to make things happen, and you know that there is a bright future in front of you, don’t you? And then what happens?

I used to be managing director of this big consulting company in Korea, and you know what? Every single project that I worked on, I was successful. You may think, “Wow, Arthur, that’s really great!” I’ll tell you: it’s not what it seems. Whenever you get really successful doing the same thing, what ends up happening is that your head starts to get a little bit big, and you start to think, “I am so awesome!” Then what happens is that you start to look at other situations where it’s like, “That can’t be my fault because I am so awesome. When things go wrong, it can’t be me. It must be you.”

About two weeks later… I started to notice that there were some people that were just kind of blaming each other. It was like, “The finance department, they didn’t give us the right budget.” And the marketing people are talking about the sales people: “They’re over-promising! They’re not actually following the process!” And the other people over here are saying, “It’s the sales department that is the problem,” and the sales department is like, “It’s the customers!” Everybody’s blaming everybody. I thought, “No, this can’t be like this. I know I can make a difference. I know I can make a change.”

So then I started to come up with really great ideas. The big buzz these days is innovation, right? So I came up with all these really cool and innovative ideas, and I’m thinking, “Wow, this is going to be great!” So I get some of the other people in some of the other departments to come over, and I say, “Look, you’ve got some resources, and I’ve got some resources. Maybe we can combine this and look at what we can do.” And they said, “Look, you do your thing, and we’ll do our thing, okay? Your department, my department. All right? Got it?” And I’m thinking, “What is wrong with these people?” But I knew that I could make a difference.

Four and a half months later, do you know what happened? I started blaming people. It was like, “The finance department, they didn’t do this. And the marketing people…” Then people would come up to me and say, “Hey, Arthur, can you help me with this thing?” I’d say, “Look, you do your thing, I do my thing.” I got sucked in. I got sucked into the culture. I went in there. I had everything I needed to succeed, but after a while, I gave up.

You know how there are people in some companies that other people look at them and say, “Those are lazy people. Those people are bad”? You know what? It’s all a matter of perspective. I don’t like it when I see all these people being lazy. Guess what? I became one. I started doing a lot of “busy” work—nothing that was really productive, but I was busy.

I would go home, and I’m thinking, “My gosh, what is wrong with me?” I wasn’t satisfied with my job. I had given up that I could really be any success—any real success—in this organization. Sure, maybe I could get promoted sometime down the road, but could I really make a difference? No, I didn’t think I could. I thought that I was doomed. And I couldn’t quit because I needed the money.

And so one day, I looked at myself, and I realized I wasn’t performing up to my potential. I wasn’t being the person that I really was. I was being less. I was being less than I knew that I could be. And you know, there are people that can tell you you’re bad, that can blame you for all stuff, but nothing is worse than when you look at yourself and you know that what you’re doing is less than what you’re capable of.

So I decided I was going to go and talk to these other “bad” people that were making my life difficult at work. And you know what? I found out something very interesting, something completely unexpected. I found out that these people were actual, real human beings. They actually had standards. They had dreams. They also got sucked in. They got sucked into the culture.

Every single one of us has the potential to be awesome. I mean you look pretty awesome, right? Here’s the thing: culture, the environment that you work in, affects you.

How many of you have friends? There’s at least a few. For those of you that don’t have any friends, maybe you can make some in the crowd. Let me ask you a question: when you are together with your friends, do you act the same way as you do when you’re at school or at work or with your parents? Do you have the same behavior? No. Why? Is it like, “No, at this place, I must act like this. I must change.” Or is it that each environment literally brings out something different in you?

Why does one group affect us so poorly when another group can bring out the best in us? Why does that happen? The reason is because as human beings, we have experience. We see things in specific ways, and we believe that our way works.

Here’s the thing: we often focus on the process instead of the objective. If I were to ask you, “Do you believe that everybody has the same idea for the perfect ideal working environment? Would you believe that everybody has the same thing, or do you think everybody’s got something different?” I have asked that question and tested it in 37 different countries and across cultures, across age, across perspectives of education and philosophy—everybody from the janitor all the way up to the CEO. I can tell you that everybody at the end of the day wants the same thing: they want the same ideal working environment.

Let me tell you what the five main things that everybody wants are. I want you to think about this right now while I’m telling you this thing: what is your ideal working environment?

Number one: people want teamwork. People want to be able to count on other people, work together and accomplish things together.

Number two: they want a supportive environment. If you’ve got an idea, or maybe you’ve got some direction, these people will listen to you. At least somebody’s going to accept this, like, “Hey, let’s at least try it. Maybe it’s not going to work, but maybe we can try something,” or maybe at least give you some credit, maybe at least take you seriously.

Number five: at the end of the day, the final thing we want, we want to have fun. We want to enjoy our work. How many of you would really love to go to a job where you say, “I hate my job, but it’s great”? You want to enjoy it. You want to be able to see your job as an extension of your life, not as a necessary part to help you survive.

Why do we focus on the process? We did a study last March, and we looked at the top leaders, the people that were in top leadership positions. We looked at those who actually were real leaders and really had people who were saying, “Wow, yes, I believe in you.” We also looked at the same kinds of people in the same kind of situation but who had no real leadership ability, who basically created organizations through fear, through making people wrong.

How many times have you been in a situation where you know that you have a better idea than the person up there? Maybe it’s your teacher, maybe it’s your boss, and you know that your idea is better—you know it!—but you don’t say anything. “What if I’m wrong? What if I disrespect this person? What if they ask me to actually do something about it?” So we keep quiet, and we maintain mediocrity. We maintain being underachievers.

Awareness is not just about who you are, but it’s about the foundational way that people perceive things. In the directive communication psychology colored brain model, we’ve identified that people literally have a genetic process of interpreting things. For example, there are people out there who the moment that somebody says, “Hey, here’s this idea,” you’ll say, “Wow, that’s great!” And immediately, you start working on it. Then you start moving on it, you start asking people some questions and you start taking action. This is what is called “chaotic processing.”

Then there are others that go, “Oh, my gosh, why is this person doing this?” Then immediately, those people are thinking, “No, I need to study this. I need to make sure that you literally have a structure, and this structure is like this and like this. Once I understand that structure, then I can take action. That’s how I then get clarity.” That’s called “linear processing.”

Others are intuitive. It’s like, “You know what? It just feels right.” They really can’t explain it, but for some reason, they just seem to have this intuition about how to get things done.

Finally, you have people who are processing things through information, through data, connecting everything, lots and lots of details. These are called “relational processors.”

What happens when we go into our jobs is that people make us wrong. Why? Not because we are wrong, not because we don’t have potential, but because they see things literally through different colored glasses. I actually have some right here. Do I look cool? If I’m seeing you through blue-colored glasses, and you’re looking through red-colored glasses, and we’re looking at the same thing, well, guess what? It’s going to look different. My way works for me, and I’m really good at doing it my way. But what about you? Would you be equally as good doing it my way? Probably not.

So sometimes, our managers set us up for failure without even realizing it. They set us up to be underachievers because they want us to focus on their process in order to reach the objective. They blind us, and we give up.

Now it’s your turn to break that cycle. Take control. Learn about who you are. Manage your own expectations about others. Don’t expect these people to be able to see things exactly the way that you do. And don’t expect them to do it for the same reasons that you do. Once we understand ourselves, we understand our environment, then we can take control. Instead of being affected by your environment, you will be affecting the environment, just like when you go into a group of friends and you take the lead, and you change the entire dynamics of that group. Now it’s your turn.

With that, I wish you great success. 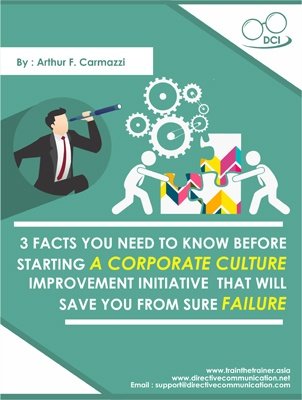